This is the final mock-up I did of the Mos Speedrun stage select screen. It’s surprisingly close to the final version that ended up in the game. From quite early on we wanted to make the game as accessible as possible, and we took this to the extreme here by having a single screen that the game loads up to being the way to access all the stages, levels and options.  I mocked up the screen in Photoshop and then drew the annotations in a separate layer using a tablet – this was a lot better for programmer and artist than trying to explain what was going on in a separate text file.
The logo was meant to be temporary but I grew to like it, so it ended up being close to the one that ended up in the game (after some tidying up of course). Another change we made was to lose the big star that was awarded for completing every badge in a level – I can’t remember why we didn’t end up using that though.  I think one of the latest ideas we had was to make the background spin which I think gives this screen a really nice look.  The colours in the background change for every levels that is selected, and the colour choice is algorithmic. We use the golden ratio (~1.618) multiplied by the level number, multiplied by 360 to select the hue. This spreads the possible colour choice out as much as possible and avoids any repetition in colours. 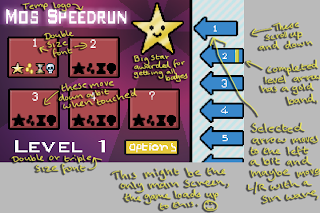